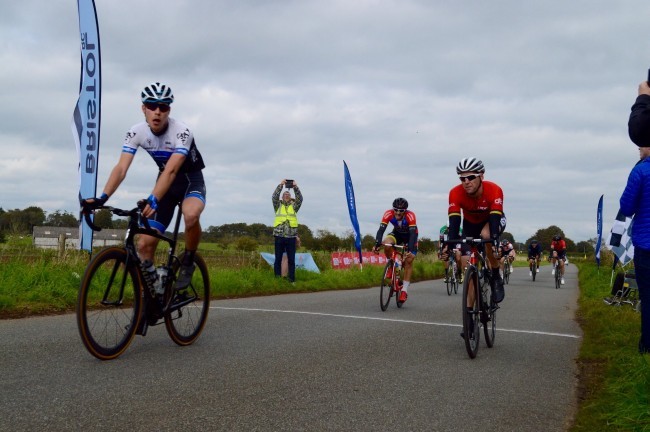 Joshua Croxton (Team Tor 2000 KALAS) sprints to victory in A Bridge Too Far Road Race in the penultimate round of The Steele Davis Cotswold Cycle Racing League, hosted by Bristol Road Club.

With only 10 points between Jamie Wilkins (Veloton) 152 pts, Ross Phelps (Bristol RC) 143pts, Ben Luckwell (24/7) 142pts and 2 rounds to go, it was all to play for in the overall for The Steele Davis Cotswold Cycling League. With Ross on holiday it was opportunity for Jamie and Ben to gain some ground.

With added presence from non Cotswold League teams such as Team Tor 2000 and Mid Devon CC, the race was far from predictable. However it was Bristol Road Club’s Shaun Cook who was riding aggressively with two hard attacks within the first 3 laps. With the second attack sticking, he was joined by Nic McKibbin (Bath Cycling Club), Charlie Beake (Tri UK) and Ben Lockett (Saint Piran). With the four riders working well together they built up a lead of up to a minute from the main pack.

The Cotswold Road Race League is going down to the wire again in 2017 so at Bristol RC's event there were effectively two races going on: one for the win, which the leading league riders were happy to leave to non-league entrants and others in the break, and another one for league points. As I'm still clinging on to the series leader's jersey, the latter was my sole focus. Ben Luckwell (24/7), Matt Franklin (BRC) and Jacob Pilkington (VC Montpellier) were all of the same mind and we kept a careful eye on each other. With two laps to go Matt attacked on the climb, followed by Jacob and then myself. For a moment it looked like we'd escaped from 24/7 but then half a minute later Ben Luckwell appeared in the rotation having made a very impressive effort to get across the gap, so it was all square. In the finale, Matt darted away with a mile to go and none of us chased him. Wily old Luckwell showed both his power and experience to beat Jacob and myself in the sprint, closing the points up even tighter.

With only the best seven results counting, I'm actually now behind Ben and the maths for the final round on Sunday 24th in Cricklade becomes even more complicated because it's about by how much each of us can improve our worst scores. The series title is now only between Ben Luckwell and myself, and my worst score of 19 means the odds are against me. I also have to beware of Matt, Jacob and Ross Phelps (BRC), each of whom could still overtake me. Time for one last push.